The Immortal Life of Henrietta Lacks

There are three types of books: Those you buy and read right away. Those you buy and put on the shelf for some other time.  Then there are those you put on the shelf to read some other time—and actually do. For me, The Immortal Life of Henrietta Lacks by Rebecca Skloot falls into the latter category. I bought it in 2011 and didn’t pick it back up until recently. I finished it in only a few days.

My renewed interest in Skloot’s book has a practical motivation. I assigned The Immortal Life of Henrietta Lacks in a creative non-fiction course scheduled this coming fall. This summer, instead of compartmentalizing my work as a scholar and teacher—research and writing for academic publications during certain weeks; syllabus preparation during other weeks—I’m combining tasks.

With this frame of teaching in mind, I offer my take-away from the book in the form of summary. In a subsequent post, I describe future plans for teaching creative-non fiction with The Immortal Life of Henrietta Lacks.

Skloot’s book unearths the history and aftermath of the infamous “HeLa” cell culture. In 1951 when George Gey, his wife Margaret, and their lab assistant Mary Kubicek cultured malignant cervical cells from a patient identified as HeLa, they became the first to create an immortal human cell line. Until then, Skloot writes, “scientists had been trying to keep human cells alive in culture for decades, but they all eventually died. [HeLa were] different: they reproduced an entire generation every twenty-four hours, and they never stopped” (4).

Gey quickly developed a “air freight shipping system” to send HeLa to interested colleagues, and before long, a HeLa factory was built at the Tuskegee Institute to produce the cells en masse (Skloot 95). Other HeLa manufacturing centers, including those operating commercially, eventually sprang up. Notably, Skloot takes pains in The Immortal Life of Henrietta Lacks to portray Gey as a scientist interested in the pursuit of knowledge for public good; for instance, she often references his sometimes direct refusal to patent, and thus profit from, his discoveries and inventions.

Over the years, HeLa has helped scientists not only better understand cancer; it also has led to the development of drugs for myriad diseases (Skloot 4).  HeLa even was used to test the polio vaccine in 1952, which marked the first practical application of the cell line as well as the impetus behind the Tuskegee Institute’s HeLa operation (Skloot 96). 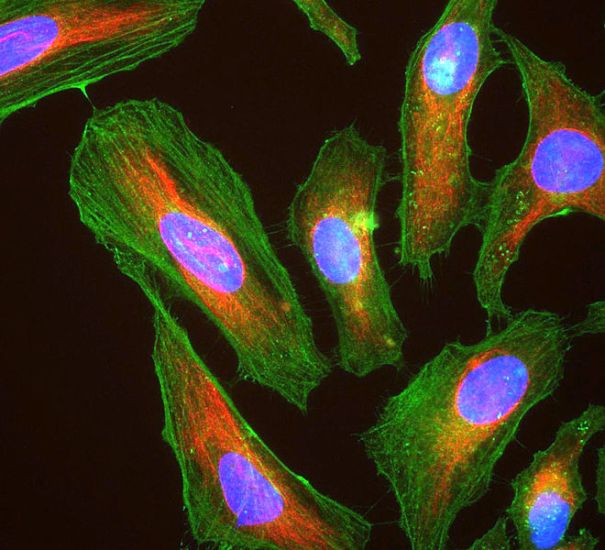 But the story of HeLa is not simply about scientists and their discoveries. Who is Henrietta Lacks, the African American woman from whom HeLa originated?

Henrietta passed away in 1951 at Johns Hopkins University from complications related to cervical cancer, not long after her tissue was taken and sent to Gey’s lab. For Skloot, Henrietta’s story and that of her family’s is as equally important as HeLa’s.

Thus, at the beginning of The Immortal Life of Henrietta Lacks, Skloot focuses on Henrietta’s interior life (she was a mother, wife, cousin, friend), but also her cultural context. Henrietta was born in Clover, Virginia to tobacco sharecroppers. In search of better economic opportunity, she and her husband moved to Baltimore, Maryland where they raised five children, including a daughter who was institutionalized not long after Henrietta’s death. Henrietta was a loving mother. She also was a congenial friend: she enjoyed occasional nights out dancing, where she more than likely showed off her always-painted, never-chipped toenails—a practice she continued through her arduous cancer treatments.

We learn much later in the book that Skloot waited years to view Henrietta’s medical records. During this time, Skloot actually was working intimately with Henrietta’s family, particularly Henrietta’s daughter Deborah. However, the family did not immediately feel comfortable giving Skloot direct access to Henrietta’s records. And for good reason. The family had no knowledge of HeLa until the 1970s. They felt violated, especially by the medical establishment and commercial enterprises that profited billions from pieces of Henrietta’s body.  Indeed, “Henrietta’s cells have helped biotech companies make millions of dollars, yet her family has never benefited from the commercialization of HeLa cells” (The Lacks Family).

Even those claiming to be advocates for the family, including some writers who sought to tell Henrietta’s story, eventually demonstrated they could not be trusted. What assurances did they have that Skloot would be different–that she wouldn’t con or disrespect the family?

Skloot reveals the mechanics of Henrietta’s cancer—it’s likely genesis and growth; it’s response to prevailing medical interventions—but without sensationalizing it and without decoupling it from its cultural and historical context. In divulging some of Henrietta’s medical records (with the family’s permission, so it seems), she sheds light on the detection and management of cervical cancer in the late 1940s. She also acknowledges how race and, to a lesser extent, class, shaped this treatment, given that Henrietta was an African American woman who was seen in a segregated hospital.

Paradoxically, in divulging Henrietta’s medical records, Skloot also humanizes the HeLa story, which for so long had been misattributed or depersonalized all together. Henrietta was a real person with family, both living and dead. She went through real pain, and she had to endure it while trying to mother five children.

Most imporatntly, Skloot makes visible the trauma her children endured in the aftermath of their mother’s death and discovery of HeLa thirty years later. For me, this is perhaps the most powerful part of not only the book, but also the Henrietta Lacks/HeLa story.

If you’ve enjoyed reading this post or if it’s prompted you to get the book for yourself, please also consider donating to the Lacks Family and The Henrietta Lacks Fund, a non-profit organization created by Rebecca Skloot that “strives to provide financial assistance to needy individuals who have made important contributions to scientific research without personally benefiting from those contributions.”