Home › Everything in Between › Blog Lab › Blogging My Research › BMR: Hoosier Res-Cuer, Official Magazine of the Indiana State Tuberculosis Sanatorium

I’m blogging my research (BMR) for a conference paper on the Hoosier Res-Cuer, the official magazine of the Indiana State Tuberculosis Sanatorium, which was issued monthly from 1925-1946. In an earlier “BMR” post, I summarized my paper, “Discursive Rest: The ‘Little Presses’ of the Sanatorium Era,” and noted how the magazine illuminates beliefs about TB and reflects the formation of a unique participatory culture.

In this post, I share findings from an archival research trip to my PhD alma mater Indiana University. [A special thanks to Francis Marion University and the Department of English for funding this trip.] IU owns 240 original issues of Hoosier Res-Cuer. Though many TB sanatoria in early-twentieth century America published magazines written by and for patients, I’m drawn to Hoosier Res-Cuer for several reasons. One, IU’s holdings are remarkably complete: only the first four issues are missing. Two, I understand the context of the magazine’s production. For a chapter of my dissertation, I researched the Indiana State Sanatorium’s records at the Indiana State Historical Society.

BMR helps me organize and share preliminary research findings. What follows is a collection of observations about the first year of Hoosier Res-Cuer. Specifically, I discuss the magazine’s mission, writers, and content as it emerged in 1926. 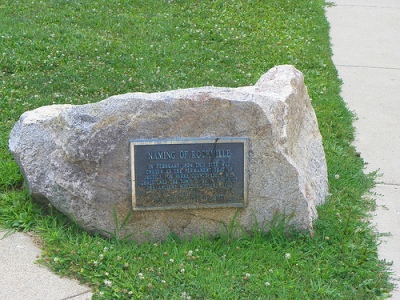 Mission
Hoosier Res-Cuer was “published monthly at the Indiana State Sanatorium in Rockville, Indiana in the interest of good health.” This statement appears in each issue and in the same location: in a box on the upper left-hand corner of the page, a few pages into the issue.

Beyond this statement, not much else is mentioned about the magazine’s purpose, at least in the first volume. An announcement for  a subscription contest in issue 14 of volume I (9/1926) provides additional but still meager details. It explains that Hoosier Res-Cuer was “not printed as a money-making proposition,” but rather, “its purpose is to help educate the public in the ways of tuberculosis.” It should be noted that issues were sold for 5 cents in 1926.

Graphically speaking, the magazine aligns itself with the goals of the National Tuberculosis Association (NTA) by including the group’s logo prominently on the cover of each issue. (Significantly, the NTA logo is the only part of the magazine that is printed in color.)

Today, we know the NTA as the American Lung Association. In its earlier form, the organization “unif[ied] and expand[ed] the country’s regional anti-tuberculosis programs. Inspired by the identification of the tuberculosis bacteria in sputum, its [first] mission included an aggressive campaign against public spitting” (Visual Culture and Public Health Posters). Spitting came to be viewed as an unhygienic behavior that spread TB. To combat spitting and other disease-spreading behaviors, the NTA waged an aggressive visual public health campaign. Like the Hoosier Res-Cuer, many of the posters for these campaigns featured the NTA’s red double-cross.

Other Design Elements
The front covers of individual issues not only displayed the NTA’s iconic logo; they also featured one black and white photograph. Images range from portraits of sanatorium doctors, children (the Indiana State Sanatorium, like many similar facilities across the country, had children’s wards), sanatorium buildings, bucolic outdoor landscapes, or other natural scenes, such as the sanatorium’s Holstein herd. The December issues of volumes I-V, however, had no photographs. Instead, those covers featured that year’s Christmas Seal, which was sold by the NTA to raise funds for tuberculosis.

Editorial Staff and Writers
Like the magazine’s mission, the identities of the writers, other staff members, and their intended audience receive scant attention; however, their names are listed in the colophon. (Note: As I mentioned, I don’t have access to the first four issues of the magazine, so it’s possible that the mission and staff were discussed in depth here.)

The first issue of Hoosier Res-Cuer in IU’s collection lists Reverend CR Black as editor and Mabel Carmichael and Paul Payton as associate editors. In this and the subsequent issue, no mention is made of their affiliation with the sanatorium: were these individuals patients, former patients, or simply sanatorium employees?

In issue 7 of volume I, however, it is revealed ever so subtly that Payton was indeed a patient. Interestingly, this revelation comes in the form of a letter that Payton addresses to Revered Black. The letter is published in “Our Ex-Patients Page.” Sandwiched between the “Sanatorium Fun” and “Sanatorium News” sections, the “Our Ex-Patients Page” features letters written by ex-patients to Black and sanatorium superintendent Dr. Carter. Payton’s letter indicates that he has “gained 7 pounds since leaving the San and [is] a model of physical perfection—no joking.” In addition to his good health, he also has a “good job in a drug store in Hollywood, [California]. It’s one of the Liggett chain stores” and therefore pays a decent salary. Payton’s resignation from the magazine and release from the sanatorium, then, are never mentioned directly nor are they discussed in a traditional, news-based format.

In comparison to the revelation of Associate Editor Payton’s identity, the editor’s affiliation with the sanatorium is divulged upon his exit from both the magazine and sanatorium, and what is more, Black’s resignation is formally announced in a news story. The piece, which is titled “Reverend Black Resigns,” is placed directly under the colophon and extols Black’s many virtues. It explains that he is “enter[ing] the business world at Bedford, [Indiana].” While he’s presumably in perfect health, he “entered the San as a patient. He chased the cure in a successful way. While a patient and still on the ward he became interested in the welfare of other patients and took active interest in the Sunday School and other uplifting features of the San.” Black apparently spent so much time at the San as a patient and then, later, an employee, that he struck up a relationship with and eventually married one of the children’s nurses, Miss Grace Liston.

Content
To me, the most compelling part of Hoosier Res-Cuer is the patient-authored material, which includes creative works (e.g., poetry) and local news (e.g., who was doing what and talking to whom on the sanatorium’s “wards” or residential wings).

Patient-authored material fills approximately one-third to one-half of each issue of Hoosier Res-Cuer. The remaining material is comprised of news articles and editorials about the cause, prevention, and treatment of TB. Some of this material was written by the Indiana State Sanatorium’s medical staff, and at times, these pieces incorporated published works from various state health departments, including those of New York, Louisiana, and Illinois. I observed that pieces from the Indianapolis Star newspaper, which still is in circulation, appeared in the magazine as well. 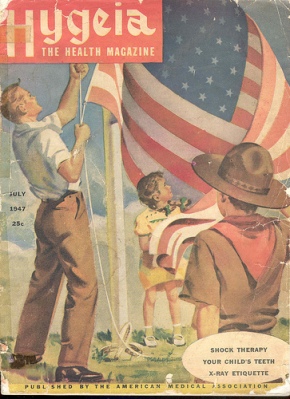 While many of the magazine’s educational and editorial pieces incorporated material from outside sources, the vast majority were culled in their entirety from prominent periodicals that focused on public health and TB. (To be clear, I’m still in the process of confirming this suspicion. However, I believe my assumption is correct because the title of original publication appears at the end of the reprinted pieces.) In particular, stories were frequently reprinted from Hygeia, The Chaser, and The Sunburst. Hygeia is an interesting but not surprising source for articles: it was launched in 1923 by the American Medical Association as a “scientific” publication about health that was explicitly aimed at laypersons.

Considering its use of previously published material, Hoosier Res-Cuer could be thought of as a mash-up. The implications of this practice raise a few questions. First, how were materials from outside publications chosen for inclusion? That is, were patient-writers allowed to read issues of Hygeia and nominate articles to be reprinted? How much time would that take? Second, what about copyright? Was their reprinting of public health material legal? Was the reprinting of public health material for not-for-profit-uses encouraged?

Keep checking back as I continue to “blog my research.” In subsequent posts, I will