Recently, I went on a six-day backpacking excursion in Wyoming’s Grand Teton National Park. I was invited by some friends I met through a Sierra Club backpacking trip I took last year. The record snowpack put a crimp on the group’s plans to hike a loop of the Teton Crest Trail (if you consider a crimp to be a complete reroute). Despite the last minute changes to our schedule, we had a great time exploring some of the canyon areas in the Tetons. Hopefully, I’ll be able to post several entries about my Wyoming trip as well as the time I spent in Jackson Hole.

This post, however, is about preparing for a trip in which one needs to fly or drive a great distance before reaching the trail head. Learning how to correctly pack a backpack is one thing, but how do you prepare  your belongings for the entire trip, which also might include air and/or car travel?

I’ve got a simple, six-step system, and it served me pretty well for a week-long journey in the backcountry areas of Grand Teton National Park. Hopefully, this information will be useful to other aspiring backpackers and maybe even some seasoned professionals.

Dump out the trunk and plastic organizing bins stored in your closet. In the process, discover that you already own some gear  that you just overnight-shipped to your house from REI.

STEP TWO. Use a list to select items from the strategically-organized piles that you’ll need to bring. Attempt to use the list despite it having been colonized by your lovable but semi-feral cat with an attitude problem. [Exhibit A: The Crazy Eyes.]

STEP THREE. After you’ve determined what items you’ll take with you, revisit the list and use it as a checklist as you pack so that you won’t leave anything behind. Follow this step. Trust me. But also frantically call one of your trip-mates for advice on gear selection. Take photos of your gear with your cell phone and send them to said trip-mate so that he can deliberate your choices. 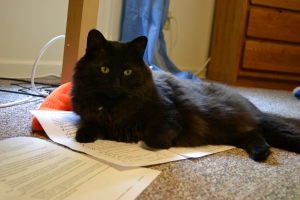 STEP FOUR. Make sure all of your equipment is clean and functional.  Discover that your gear is, in fact, functional, but through careless storage of a  full (three liter!) hydration bladder, learn 6 hours before your flight leaves that you’ve waterlogged, and thus destroyed, your beloved point-and-shoot camera. Fatigued with stress, rush to WalMart and purchase a new camera. Spend the next two hours picking out a camera and carrying case only to regret your purchases the following morning. The next day, as you drag your giant duffel bag across the airport parking lot, rip a sizable hole in the bottom of the bag. Frantically repair the hole at the Delta ticket counter with duct tape you wound around your hiking poles to keep them from breaking.

[No picture. You know, to symbolize the fact that I BROKE MY CAMERA THE NIGHT BEFORE I LEFT.]

*but two days before the backpacking trip begins

STEP FIVE. Get plenty of rest, and fuel your body with nutritious, healthy food. Eat healthy meals at the Salt Lake City airport, a sandwich shop in Jackson Hole, and several Starbucks in between but then become stricken by the most ferocious rotovirus you’ve ever had in your life.  Say a quick prayer that you’ll be able to resume eating and drinking in a reasonable amount of time. Also, pray  that your trip-mates won’t get sick.  For added measure, call the pharmacist in your home town to find out what medicine you can take to alleviate your symptoms since the diamox you’re taking to prevent acute mountain sickness interacts with Pepto Bismol, the one medication from which you could benefit.

STEP SIX. Breathe. Relax. Reflect on the fact that you’re about to embark on a once-in-a-lifetime journey with some friends old and new. It’s a journey in which you’ll come face-to-face with Bruce Jenner,  have a grunting male deer outside of your tent that sounds like a bear, and see more moose than you can count. And, most importantly, just know that in a month, you’ll be laughing about the broken camera and ripped luggage. But maybe not the rotovirus.

Leave a Reply to 12 Reading, Hiking, and Backpacking Resolutions for 2012 | The Ambulant Scholar Cancel reply